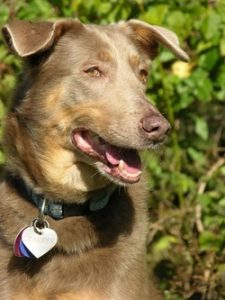 Sparkle lived on the small island of Caye (pronounced key) Caulker in Belize. Our family met Sparkle on our trip to this island in the summer of 2004, where our daughter, Sarah, was quickly adopted by Sparkle.

Sparkle was an “island dog.” In other words, she didn’t claim an owner, while many would like to claim her. Sparkle joined us for breakfast, lunch and dinner at the local restaurants — where dogs are allowed. After all, most of the restaurants are outside, with sand for floors. Sparkle is a very good dinner guest and doesn’t beg for food, but just patiently waits for the leftovers. Surprisingly, Sparkle is VERY picky about what she eats. She does not like shrimp, but loves homemade banana bread, bacon and canned tuna.

Sparkle joined us on our trips to the beach, and waited in her specially arranged bed of sand while we went snorkeling and swimming. At the end of the day she returned to our hotel with us, after a quick trip to her favorite barbeque restaurant, and then slept on our porch.

Sarah loved Sparkle and Sparkle loved Sarah. When it came time to leave the little island we called our “golf cart taxi” and loaded our luggage on it for the trip to the dock. Then Sparkle did something amazing. She escorted us to the dock, running up and down the street next to the cart, barking warnings at anyone who came too close! When we reached the dock, Sparkle just stood at the end of it and watched…

After traveling a short distance to our next island stop, we spent a very unhappy night, while Sarah cried over Sparkle. After exploring the new island in the morning, we decided that it wasn’t all what we had hoped for and decided to return to Caye Caulker on the evening boat. (Much to Sarah’s delight). Sparkle was SO happy to see us when we returned, and spent the rest of the trip following Sarah around on her bicycle and her trips to the beach, and sleeping by our door.

While I would never condone letting a dog simply run loose here, it is a different situation where Sparkle lived. We even thought about bringing her back with us, but decided that an island dog could never be happy living in our house all day.

Sparkle had plenty to eat, was spayed, and received annual vaccinations and heartworm preventative. There are only four cars on the whole island, so she was not likely to be injured in that way. In addition, we left money with the local “Humane Society” for her care. She slept on the porch where we stayed … waiting for Sarah.

We kept in touch with Sparkles “friends”on the island of Caye Caulker. At Christmas we sent a package of various doggie treats, Frontline, and money for Sparkle. It sounded like Sparkle was continuing to live her life in very much the same way as when we had last seen her. She made new friends with tourists, she visited her favorite restaurants at meal time, and laid on the porch at DeReal Macaw hotel where we stayed.

In January we had 2 e-mails from the people who were looking after our special friend. Some of the people on the island did not think as highly of Sparkle as we did. As a “joke” Sparkle was dragged into the ocean, on the far side of a concrete pier, forcing her to swim a long distance around the wall to get back to shore. The owner of the local bar, where she was climbing out of the water, told one of his employees to shoot her for coming near his property. While Sparkle was not seriously injured by the gunshot, she was very traumatized. We began to wonder if we had been wrong to leave her on the island…

We returned to Caye Caulker on the first of March. We didn’t know what to expect when we started looking for Sparkle. Sarah looked for her friend at each restaurant as we walked down down the street to our hotel. Finally, Ray spotted her curled up in a ball in the sand in front of a restaurant near our hotel. We prepared ourselves for the big reunion as Sarah ran to see her. Sparkle didn’t get up. Sparkle didn’t even raise her head – only her eyes. Our special friend looked so sad, and so thin. Ray and I looked at each other, and knew at that moment that we would not be leaving without her this time. We finally helped her get up, and determined that she had suffered some sort of injury to her back. She managed to walk to our hotel, where she gladly made her way into our room and laid down on the beach towels we had brought.

After we gave Sparkle some medication for pain, and she had eaten some homemade banana bread (her favorite), she seemed a little better. She even managed to make a trip down the sand street for breakfast the next morning. We started making inquiries into the difficulties of bringing her back to the U.S. with us.

The following morning, Sparkle and I got up early. I put a collar and leash on her, and she walked right along next to me… until we reached the end of the pier for the water taxi to Belize City. I carried her onto the boat, where she lay, quivering at my feet, for most of the hour long trip to the city. Once we arrived, I found a taxi driver that would take us to the local vet. Sparkle immediately knew the smell of the veterinary clinic was a bad thing, even though she had never been to one! Once again, I found myself carrying her, into the hospital, so she could be examined and receive a health certificate (she was already vaccinated for rabies). Afterwards, we walked through the city, back to the water taxi and returned to the island. POOR SPARKLE. Before that day she had never been off her island, and yet had ridden on a boat, in a car, and walked through a city all in one day! She made so many friends wherever we went that day. Everyone was curious about her, and wished us the best of luck. Sparkle’s adventure was over for the day , but I made a trip to yet another island to buy a special carrier for the ride home on the airplane.

We spent our last 2 days on the island feeling much better about what would happen to Sparkle. Sarah rode her bicycle to “Albert’s Mini Mart” several times a day to buy banana bread and other goodies for her. We brought back our leftovers from our dinners, since she was hardly eating. She seemed happy to stay in our room, and go outside for occasional walks on a a leash. By the time we were ready to leave, it seemed that all of the island knew that “Sparkle was going to the USA!”

Our trip home was uneventful. We flew home on US Airways. The people at the airport were very considerate and allowed us to keep Sparkle with us, out of her carrier, until time to load. Once we arrived in Charlotte, for a very long 5 hour layover, we were once again allowed to take Sparkle out of the carrier for a walk. Much to our surprise, we were also permitted to keep her with us while we ate our dinner in the terminal, and waited for our flight. Sparkle was treated like a queen and all for only $100 — less than the carrier I bought for her!

Unfortunately, we did find that she has heartworm disease, and a tick born disease as well. Her treatment parkle has now been a part of our went well, although she had a few bad days, she made a full recovery. Had we left her on the island, she would certainly have died

Sparkle has now been a part of our family for ten years! There was never a sweeter, more well behaved dog than her. Sparkle loves lying on our couch, riding in the car, going for walks, and lying in my office at the clinic looking out the window at the clients coming in. She was housebroken from the first day, and she has even learned to eat dog food! We are amazed at how quickly she adapted to her new life.

The best part of the story, is that Sarah never again has to wonder WHERE Sparkle is waiting.